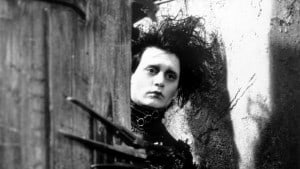 Don’t you just love those news anchors who, like Ron Burgundy in the movie Anchorman, will read anything that’s on the teleprompter?

The latest example comes courtesy of Yasmin Vossoughian, host of The Daily Share Show on HLN cable news network. Vossoughian interviewed Jon Hendren, thinking he was a defender of Edward Snowden, the former CIA employee who leaked classified information, for a segment about Snowden’s Twitter posts.

When asked about Snowden’s needing to seek asylum in Russia, Hendren answers:

“I think to cast him out, to make him invalid in society, simply because he has scissors for hands, I mean that’s strange.”

“I mean people didn’t get scared until he started sculpting shrubs into dinosaur shapes and what not.”

And finally, after another question:

“We got scared when he poked a hole in a waterbed with his scissor finger.”

Vossoughian never quite catches on and I guess her producer didn’t either. Whether it’s a news anchor striving to be the story or a network focused on generating buzz from a controversial clip, the term ‘broadcast journalism’ continues to seem like an oxymoron.

We can avoid similar problems and increase our productivity by focusing on these fundamentals:

1. Prepare. It’s clear the show’s producer, production team and on air (ahem) talent spent little if any time preparing for the interview. Hendren’s Twitter Handle is @Fart which was posted as an on screen graphic. His supposed support of Snowden consisted of tweeting once back in 2013.

2. Listen. Vossoughian didn’t listen to not 1, not 2 but 3 answers in which Hendren references Edward Scissorhands. Good listeners commit to focusing on words, inflection and body language instead of thinking about what they’ll say next.

3. Read & React. If Vossoughian figured out Hendren was trolling her after the first or second answer, she could have acknowledged it. When an on air personality is vulnerable, we cut them slack. You can apply the same read and react approach. Be confident and make decisions based on what you see and hear.