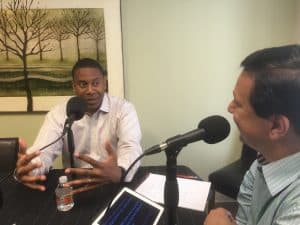 “Everyone is entitled to his own opinion, but not to his own facts.”
– Senator Daniel Patrick Moynihan

Today’s rant stresses the importance of reflecting on the facts before forming an opinion.

“The test of a first rate intelligence is the ability to hold two opposing ideas in mind at the same time, and still retain the ability to function.”
– F. Scott Fitzgerald

Today’s guest is Kevin Bolding, President & CEO of the YMCA of Greater Pittsburgh. This University of Virginia graduate has spent most of his career with the YMCA, first in his hometown of Lynchburg, Virginia, then in Detroit and Miami, before coming to Pittsburgh six years ago. Kevin talks about the need to ‘do right by people’ as his career took shape and it has continued to be a driver.

“While every Y is a unique entity, there is a common family thread within every organization.”

Kevin’s introduction to Pittsburgh was during the G-20 when he quickly realized, “this is a place where I’d like to raise my family.”

His mentors and role models share a common thread of continually dangling opportunity and growth in front of him at the right time in his career.

“My mentors have always kept me moving forward.”