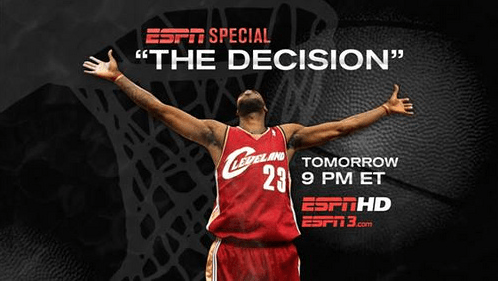 Four years ago Lebron James jilted his hometown Cleveland Cavaliers to join Dwyane Wade and Chris Bosh as the Miami Heat’s Big Three and the NBA’s team to beat.

Back then I outlined the Five Good Reasons Why “The Decision” Went Bad and how Lebron mishandled the process:

1. He didn’t communicate with Cavaliers management prior to the national announcement.

2. The decision was announced via an overhyped, over produced show on ESPN.

3. Tying the Boys & Girls Clubs to the program came across as self serving.

4. He talked about himself and all that he had done for the city he was leaving.

5. Lebron even went third person on us a bunch of times while explaining how Lebron made Lebron’s decision.

The Heat went on to play in four straight NBA Finals, winning two and losing two. Their four year run could be considered exceptional yet doesn’t match the expectations Lebron set when he said they’d win 8 titles during another PR debacle, the Big Three’s first press event.

Whether he chooses to stay in Miami or return home to Cleveland, how he conveys the message might be as important as the actual decision. He has a chance to get the messaging right this time either way.

If he stays in Miami:
“We came here as a group to make history. We’ve had a great run but we want to do even more. We’re staying together and the goal is to win more championships for the organization, the city and the incredible fans of the Miami Heat.”

If he leaves Miami to go back home to Cleveland:
“Miami has been great to Chris, Dwyane and me. We’ve had an incredible run. The fans are amazing. But we all have special memories and ties to where we grew up. It took being away to realize how important those things are. That’s why I’m going back to where it all began. My hometown of Cleveland.”

If he’s learned anything from “The Decision” of four years ago, he will make the announcement in an understated, humble manner. Let ESPN and other media outlets create the video montage of highlights and his hometown connections rather than providing video fodder for years to come.

Do you think Lebron’s messaging will be better this time around? Go to our Facebook Page and vote now!