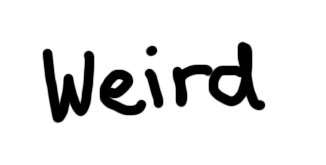 I recently attended a farewell party for a friend who is moving out of the area to accept a new position. As is often the case, time was spent reminiscing about the guest of honor.

Stories were told about how well he interacts with others and how different he is from most doctors. A physician who relates to patients and co-workers–imagine that!

Another friend leads a growing company by instilling core values throughout the organization. He laughs at himself and believes humor is essential to the creative process. Yet I’ve heard him described as odd.

In a meeting with another CEO of a large organization, he said something to the effect “Not much happens until someone weird comes along.”

If these guys are weird, I’ll take two orders of weird and a side of goofy.

Why spend so much of your time trying to fit in, acting the way you think everyone wants you to? Why do the same old things the same old way to get the same old results?

We have all spent some (or a lot) of time trying to figure out what is normal or expected behavior in an organization. The problem is organizations are inherently dysfunctional. The bureaucracy, informal and formal policies, and corporate culture usually stifle creativity and hamper productivity.

What’s the solution? Embrace your weirdness!

HR Guru John Putzier even wrote a book about it called Get Weird: 101 Innovative Ways to Make Your Company A Great Place to Work. Putzier describes how companies can recruit, retain and motivate great employees — especially in a tight labor market – by lightening up and getting a little weird.

The successful leaders mentioned earlier and many of their contemporaries have done it. Even my friends, family and co-workers have consistently described me as weird. Wait a minute – let’s stick to the good kind of weirdness.

I’m not saying completely ignore policies, procedures and the corporate culture. I am saying be yourself and think creatively. Offer that ‘crazy idea’ to your boss or co-worker. Do something out of the ordinary to make a customer (internal or external) happy. Try something new instead of hiding behind the ‘That’s the way we’ve always done it’ mantra.

Go ahead. Get Weird!