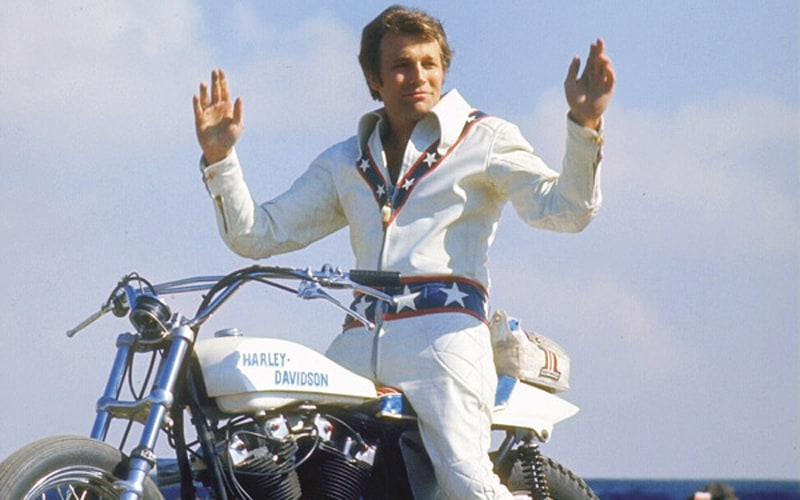 Evel Knievel passed away today. According to reports, the daredevil stuntman, who had been suffering from diabetes and pulmonary fibrosis for years, was having trouble breathing and died before an ambulance arrived at his home.

In the 1970s, Evel Knievel was a household name. Parents and kids alike watched to see what stunt he would attempt next.

But, Knievel was not only an incredible showman. He was also a true Guerrilla Marketer.

His shows included attempts to jump the fountain at Caesar’s Palace, 13 cars inside the Houston Astrodome, 14 Greyhound buses in Ohio, 13 buses in Wembley Stadium, and his most outlandish stunt of all, the Snake River Canyon via his NASA built Skycycle. Four of his events are in the top 20 most watched episodes of Wide World of Sports, including the jump in Ohio at number one.

Beyond the shows, his ‘do it all’ marketer skills also made Knievel stand out.

In the beginning, he handled everything: renting the venue, writing and pitching press releases, setting up the show, selling tickets, and even serving as his own master of ceremonies.

He also spelled his name ‘Evel’ instead of ‘Evil’ because he thought it would be better for his image.

His biggest marketing legacy, however, comes from his trailblazing efforts in merchandising and sponsorships.

Merchandising of entertainment and sports stars is part of the culture today, ad nauseum. Back in the ’70s, it was just beginning and Evel was a big part of it.

Most guys born in the late ’60s either had or wanted to own the Evel Knievel Action Figure (including a bike with pull chord and ramp). How cool was that?

For you trivia buffs, quick: Name, off the top of your head without Google, Evel’s female action figure counterpart?

There was an Evel Knievel Pinball Machine and the perfunctory book deal for Evel Knievel on Tour. The book, like some of his stunts, almost led to his demise…after he beat the author with an aluminum baseball bat for alleging Knievel abused his wife and kids and used drugs.

As adults, we now realize Knievel was over the top in more ways than one. He battled a number of demons and needed the spotlight and adrenaline rush way too much.

From a marketing and PR standpoint, Evel Knievel was a quirky, less than perfect pioneer who pushed the envelope. He probably unknowingly towed the line between marketer and snake oil salesman…weaving back and forth throughout his career and life.