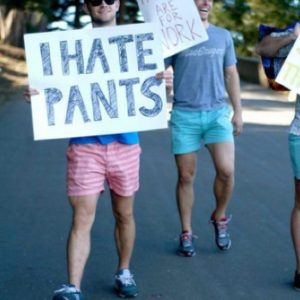 Have you heard of Chubbies — Radical Shorts for the Radical Man?

Talk about hitting the bullseye targeting. The company’s manifesto says they exist to bring you the best weekend clothing that has ever been conceived and tells the back story of how four guys started the company on two fundamental premises:

First that pants are for work and second, the state of today’s shortswear was dire.

These four “guys” committed to one big idea: Making shorts – more than 100 different designs including “The All Days,” “The Khakmeisters” and my favorite “The Sleepin Ins.”

Chubbies also clearly defined its target market as irreverent dudes or guys who wish they were irreverent.

Or just guys that don’t really want to shop but also don’t want to look too stupid or wear uncomfortable pants.

The company leverages memorable messaging such as “Don’t ever go into a store to buy shorts. Plain and simple.”

They introduced creative promotions such as the Thighber Monday sale.

And Chubbies committed to Snapchat as a major social media platform to generate a buzz and to build a base of loyal followers they describe as Chubster Nation.

Chubbies focuses on casual shorts for dudes and they hit the bullseye while displaying no shortage of innovation or creativity.